On my first night in Argentina, I ate Indian food. My wonderful friend Paula (another UNC student in Buenos Aires this summer) invited me to join her for dinner with friends from her program. When she sent me the facebook message, I was sitting alone in my room feeling vaguely pathetic for not being outside. I was also especially appreciative of the opportunity because I’m being deliberate about making friends here, since I’m not living with my program participants the way Paula is. So I met some of her friends, who are all Georgetown students because it’s a Georgetown medical research program. They invited me to hike Patagonia with them later this month, which is awesome. Hopefully I can become friends with them, even though they’ll only be here another five weeks while I have 10 ahead of me.

But I’m starting at the end. My day began somewhere over Central America. I landed in Buenos Aires at 8am, and made it through customs and to my house with no trouble (despite my dad’s insinuations that I’d climb into an unmarked vehicle because the driver looked nice and offered me candy). My landlady, Carolina, is as friendly and helpful as I could have ever hoped for. She showed me around the house, where her mother lives downstairs and she lives upstairs with the tenants. Right now there are three other women renting rooms here, but all of them are away on trips (two return tomorrow and the other on Wednesday). My room is basic but comfortable, and has a little balcony overlooking a small courtyard in the back. 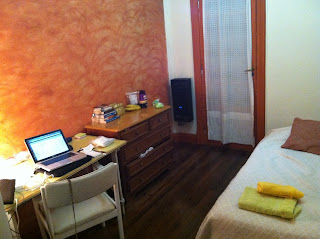 After I unpacked, Carolina and I walked to the grocery store together. I was a little overwhelmed by everything, so I bought only enough food for the next couple days. I’ll go back later (when no one is waiting for me) and shop more thoroughly.

This afternoon I just bummed around in my room, arranging things and sending emails and taking a long nap, until I got ready for dinner. Carolina helped me figure out the bus route, and I met Paula and her friends at 8:30pm, early by Argentine standards. They normally dine closer to 9:30 or 10; the restaurant was starting to fill up as we left.

I’ve mostly just been taking everything in. I loved riding the bus because I could watch people and see the streets. First impressions… the city seems dirtier and more graffitied than I expected, but that could just be this neighborhood. It doesn’t bother me. I haven’t talked to any porteños (what Buenos Aires residents call themselves) except the man next to me on the plane, my driver from the airport, and the grocery store cashier, but they were all super nice and helpful with my struggle to speaking Spanish. Their pronunciation is slightly different from what I learned in class, which throws me off sometimes, but overall I feel like I’ll get a lot better really fast. I love being surrounded by the language and having so much opportunity to speak it. I’m constantly translating in my head, even if it’s just naming everyday items I see as I walk. Mastering a language is a huge challenge, but it’s one of my dearest goals and I’m thrilled to be taking this big step in that direction.