Léa and I arrived in Córdoba early Wednesday morning. We went straight from the bus station to the hostel, which turned out to be a really cute place run by a British guy who fell for an Argentine girl.

As we were checking in, we heard loud booms and shouts from somewhere nearby outside. Worried, we asked the guy at the desk if it was safe for us to go out.

“Oh sure, that’s just a protest. Happens nearly every day,” he told us nonchalantly.

So we set out a little warily, especially since the noises were coming from the direction we wanted to go, the center of town. But he was totally right: it was a loud but peaceful march in the street. Léa and I couldn’t make out what exactly it was about, but I get the impression that Argentines like to protest just because they can. Which makes sense, considering their recent political history. From the military dictatorship of the 70s to the government corruption that is still rampant today, Argentina’s citizens have a lot to complain about. And they don’t take for granted their right to voice those complaints. When I tell people here that I study journalism, they always react with a deep nod of approval, and often a smile of admiration or appreciation. They recognize a crucial need for honest journalism.

Our day in Córdoba was a pretty standard tourist visit, checking out cathedrals and art museums and historic buildings and an old Jesuit crypt. We spent the whole day with a French guy our age who was traveling alone and staying in our hostel, which was fun. One highlight of the day, as I mentioned in my last post, was a random exclusive tour we somehow landed in the city’s congress building, from a super nice woman who worked there and was willing to show us around. It was a gorgeous building, and we got to see the province’s legislative session in progress!

We couldn’t exit through the front door because the protesters had gathered there (quite noisily), so we slipped out through a side door.

Next, our impromptu guide walked us to an archive down the road where every issue of the local paper since 1911 was preserved! Needless to say, I thought that was super cool. 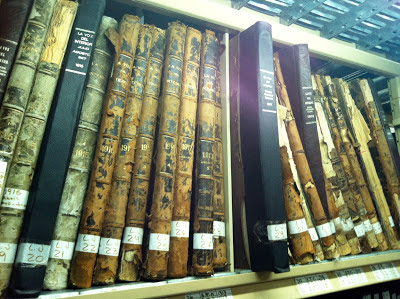 Later in the day, we walked to Argentina’s oldest university, which is coincidentally abbreviated UNC (Universidad Nacional de Córdoba) to see the campus. A big crowd tipped us off that there was something going on. We asked around and found out that none other than Argentine President Cristina Kirchner was about to arrive! So we pushed through the crowd to the front and waited until she arrived. We saw her walk across the stage and wave, but there were several performances and speeches before hers, so we left before she addressed the crowd.
Back at the hostel, Léa and I napped until dinnertime (11pm) and then went to bed, since both of us had a little cold. And we had to be up early the next morning for the next adventure!