Yesterday was wonderful because I spent most of the day reading. I finished The Da Vinci Code mid-afternoon, feeling pretty full of myself for being able to solve some of the clues before the characters.

On my run that afternoon, I spontaneously stopped to check out a bookstore that I happened across. It was in a little plaza. Most of the other businesses were closed by the time I got there, but there was a photo gallery open nearby. I poked my head in and ended up meeting the photographer himself. We chatted about Paris, because he had several photographs from Paris and also because much of The Da Vinci Code takes place there. Also turns out he is good friends with Richard McCarthy’s dad. (Richard is the founder and executive director of marketumbrella.org, the nonprofit umbrella organization that runs Crescent City Farmers Market.) And his wife used to serve on the CCFM board. New Orleans might look like a big city, but it often feels like a small town.

Last night I went out to dinner with Krissi, John, Woojin and Joyce. It made me happy that a solid third of the Robertson group was willing to go out! One girl never eats out because she’s on a strict diet, and two others cook at home because they’re vegan. The boys mostly sleep in the evenings, and several people often work nights. So it’s often hard to find friends to go out to eat with.

But, Krissi, John, Joyce, Sarah and I all went out to eat together tonight too! Success two nights in a row! I sometimes feel like an overeager puppy who can’t find anyone to play with. So it was really fun eating out with a bigger group like that. 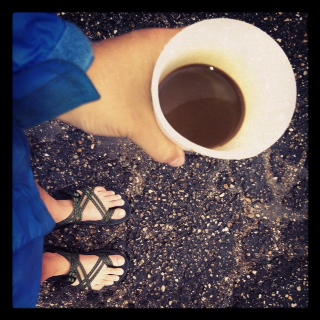 Today it rained all morning and much of the afternoon. I literally sat in the downpour from 9am to 1pm, clutching an umbrella, a chicory coffee, a homemade muffin, and a clicker. For research purposes, I was counting shoppers as they entered the market. The storm didn’t put any damper on my mood (see what I did there?) because the rain cooled things off, plus I was super prepared with my rain jacket and Chacos sandals. This scenario might sound uncomfortable to some people, but to me it was quite a pleasant morning. I left a bit bedraggled, but in a great mood. 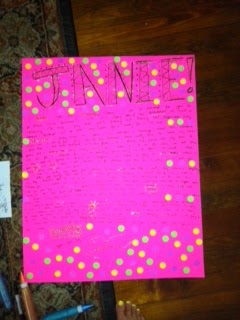 The afternoon I spent on a care package for Janie, who is working at a Texas summer camp for five weeks. I had a lot of fun shopping for her and making a giant poster in lieu of a regular letter. She has a flair for extravagance so I know she’ll love it.

Remember the poodle that only drinks bottled water? He visited the market again today. Let me put your fears to rest, he did not suffer the inclement forces of the elements. Don’t worry, he had on a little yellow raincoat made specially for him. But I was appalled that his owners brought him out without his own wellies! 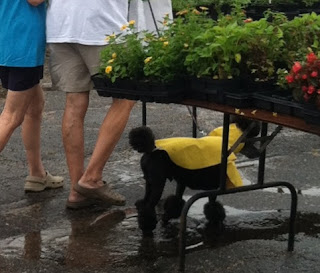