Saturday was yet another early morning. We jumped into a van that picked us up from the hostel at 7:30 a.m., and we drove two hours west, into the Andes Mountains. All along the way, our tour guides narrated the journey with geology lessons and explanations of our surroundings.

In the foothills, we stopped at a breathtakingly beautiful lake. 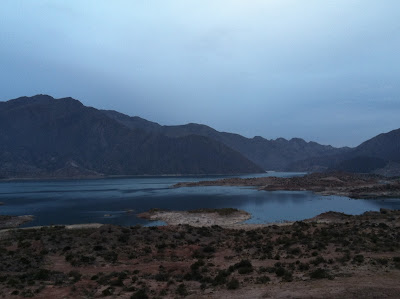 The next stop was a cool natural rock bridge over a stream covered with snow. I can’t post pictures of that because my iPhone died and I had forgotten to bring my big camera. I bought a disposable camera, so I’m looking forward to seeing how those photos turn out.

Though I of course was aching to be snowboarding and wishing I was dressed appropriately to make snow angels and go sledding, just the thought of my location was incredible. I visited the tallest mountain in the Americas! So epic. I really hope to come back some day and explore on foot the wilderness of Argentina, this wild and beautiful land of which I’ve only gotten glimpses.

Lunch, of course, took several hours. We ate at an overpriced parilla (Argentina grill), where the menu options were meat or pasta, as per usual at Argentine restaurants. Randomly there was a cheese omlette as well, so I chose that. I really do miss well-prepared vegetable dishes. But the company was good, and I was in no rush.

Overall it was a fun day with spectacular scenery.

That night, we followed up on the invitation from Isabel’s friend to spend a day at his ranch outside Mendoza. We took an hour-long bus to a village, where the friends picked us up. Not knowing what to expect, we were a little nervous that we’d be intruding. But the house was full of friendly young people who were incredibly kind to us. After a quick shower, Léa and I joined the group, a dozen or so friends from the Mendoza area, and chatted over wine until dinner was ready (after 11 p.m.). Everyone ate around a huge dining room table, and then gathered in the living room around the crackling fireplace for more drinks and talking later. By far one of my favorite parts of the trip to Argentina, in general!