Getting behind on my blog is terrible because it’s so hard to catch up without either summarizing or overloading with detail. I’ll try to stick to the highlights, with pictures to make it more interesting.

Friday night was the Argentina v. Colombia World Cup qualifier fútbol game! I went with a group of girls from my program, plus a few extra friends. The game ended in a tie, but the energy and excitement all throughout was so much fun. Plus I got to see Messi play, which was pretty epic. The group all got dinner together afterwards at an excellent pizza place near my house.

On the way back, there were musicians playing on the subway— a sax, a trombone, and a washboard. They were incredible. I think that sort of thing might happen in any big city where there’s a subway, but for me it was entirely novel and charming.

Saturday I went out to La Provincia, which is what they call the area outside the city limits (the core of the city is referred to as La Capital Federal). I met Léa at her host family’s house, which is in La Provincia about half an hour north of where I’m living. Léa, her host mom and sister, and I drove to visit a couple of old historic houses in a really pretty area. I’m still not completely clear on why the houses were important besides from being beautiful, but I know at least one famous person lived in one of them. It was a lovely day in this crisp fall weather. Léa’s host family is really nice, and I especially liked the opportunity to practice a little more Spanish.

Saturday night I prepared and ate dinner with my housemates. They’re all friendly and fun, and the dinner was delicious. 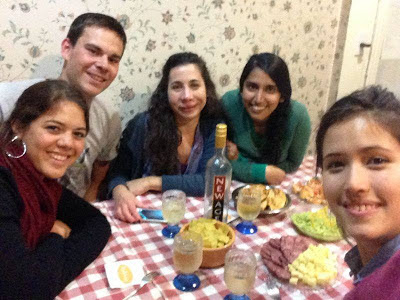 Then I went out with some of the girls I had met the night before at the futbol game. After hanging out at their friend’s apartment, we went to a tiny club called Dubai. We had a lot of trouble getting there because our first taxi driver had never even heard of it! But we were supposed to meet someone’s friends there, and we made it eventually. Things happen so late here that people were still lining up outside the club at 4:30 a.m. when we left!
I slept in super late on Sunday morning, and then met the same girls, plus a couple more, for brunch near my house. Nearly everyone in this group goes to Duke or UNC, so I’m excited we’ll be able to still hang out even when the summer is over! Brunch was at an amazing French cafe that I’m definitely returning to.

Then we walked (for a looong time) to an art museum, stopping to take pictures of the sunset on a pedestrian bridge nearby: 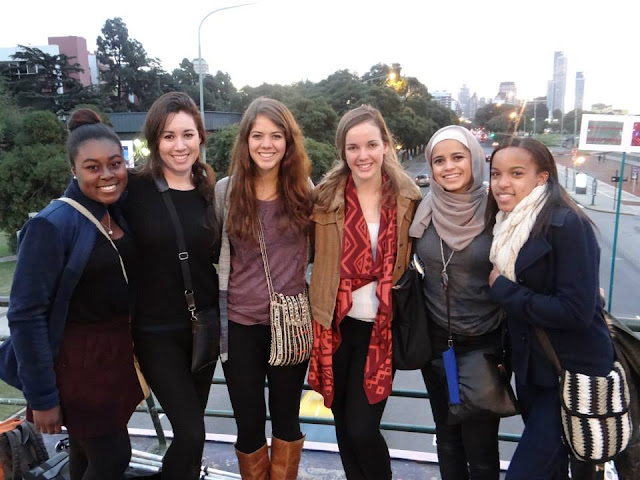 We stopped for helado (ice cream) on the way home. I tried dulce de leche, a sweet caramel flavor that’s an Argentine favorite.