A Day at the Farm

On Monday I earned my farmer’s tan the most authentic way possible. I got up at 4:56am in order to drive the 40 minutes to the Perilloux farm by 6am, which is when they start working every morning. I spent the next six hours helping harvest their crops for the Tuesday market. We picked okra, bell peppers, snap beans, tomatoes, kale, eggplants, cucumbers, cantaloupes, watermelons, and more. It was really cool learning what to look for with each crop, like size and color and firmness. 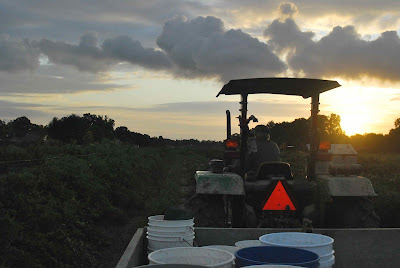 The most fun thing to harvest was the melons. Timmy (the owner of the farm) asked me, “Can you catch?” I laughed and said, “I think so!” I was stationed on the trailer behind the tractor while Timmy’s 91-year-old father (who still works in the fields) very slowly drove the tractor forward. Timmy and Dennis, a neighbor who has worked at the farm since he was ten (and the one who invited me), walked through the field alongside the tractor and searched for ripe melons. Then they’ d toss them up to me and Spencer, Timmy’s son. We’d catch them and set them down on the floor of the trailer (or the wagon, as they called it). I thought it was really fun. But I was glad that I wasn’t the one having to pick up and throw the heavy melons (did you know watermelons are 92% water? seem they are very aptly named). 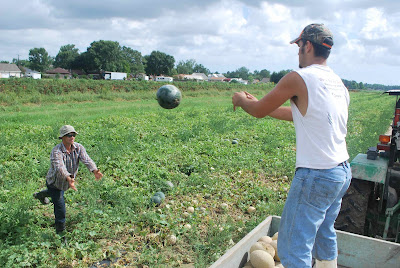 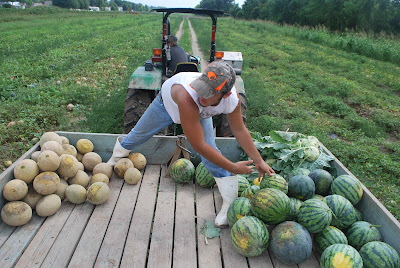 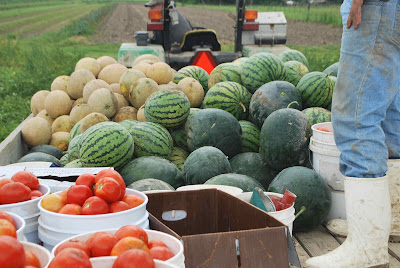 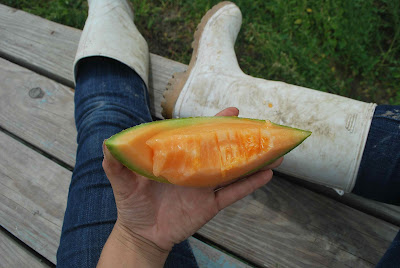 I had a blast working with these men. It was so cool to see three generations of one family working together. They joked around a lot, playfully picking on each other, but always stayed focused on getting the work done. It seemed to me their primary motivation for working quickly and efficiently was the lunch they were looking forward to. Timmy excitedly told me his wife was making fried chicken and french fries— it sounded like that was his favorite meal.

Ironic that I just wrote a post about my vegetarianism, because the very next day I ate chicken. I know this frames me as hypocritical and/or weak-willed, but I believe it was the right thing to do. I say I’m vegetarian because it’s a simple way of telling people I don’t eat meat, but really my eating habits are more complicated than that. Technically I’m pescatarian, which means I eat seafood but not the flesh of other animals. I just say vegetarian because I think it sounds less condescending.

But, to quote Pirates, “The code is more what you’d call guidelines than actual rules.”

My real rule is that I’m vegetarian as long as it inconveniences only me. I always prefer not to eat meat. Usually it’s not even appetizing to me; I don’t miss it because I simply prefer other foods. But in some situations, it’s rude and can even be disrespectful to refuse to eat meat. For example, in many (most?) cultures it’s insulting to refuse food prepared for you by someone else, especially if you are a guest in their home.

I see this flexibility as acceptable, even necessary, since I’m not vegetarian on moral grounds. If it was a moral decision for me, I think I would be obligated to operate under more absolute rules. But my eating habits are shaped simply by personal preference rooted in values of physical and environmental health. Respect for others trumps personal preference.

So I ate the fried chicken Timmy’s wife prepared for us. I didn’t eat it because I like eating chicken or because I wanted to eat chicken. I ate it because it’s more important for me to honor the generosity of others than to indulge in my preferred habits. I was happy to be able to tell Timmy and his family how much I enjoyed the meal, a compliment they wouldn’t have believed had I refused to eat their food.

After lunch, we finished washing and sorting the vegetables, then loaded it all onto the back of the truck, ready to be driven to the market the next morning. 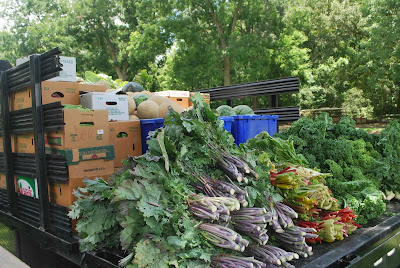 Then Dennis and I went swimming in Timmy’s irrigation pond. Timmy had built a giant diving platform with a slide and a zipline into the water, all of which I had a lot of fun playing on. It was a wonderfully relaxed afternoon. I had nothing I needed to do, nothing to think about or plan or work on. Such relaxed moments like that are rare for me. I spend so much time rushing around “doing” that I fail to focus on simply “being.” I loved that afternoon because I was so fully immersed in the pleasant simplicity of the moment, my mind filled with little more than the feeling of the sun and the water. 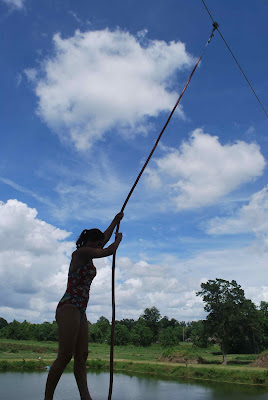 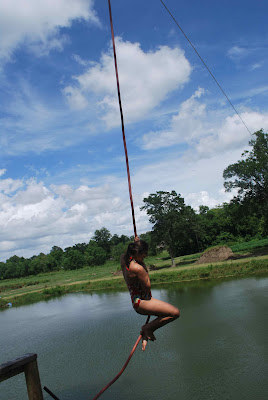 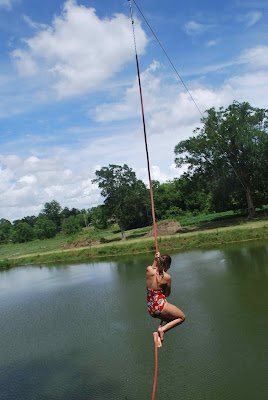 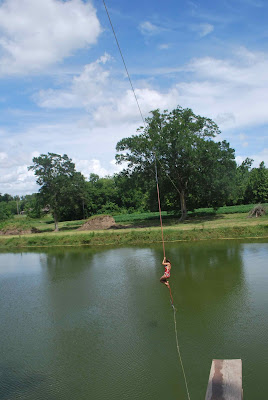 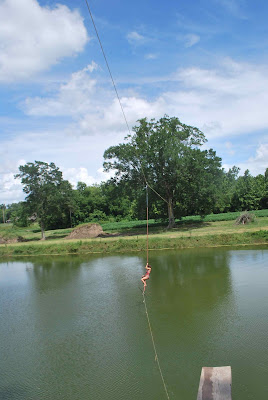 That night a big group of us walked to a Chinese restaurant for dinner then got gelato afterwards. A delicious ending to a delightful day.