A Day in the Life

The incessant drumming on the street outside my office building is giving me a headache. People are always protesting in the streets here, but usually it’s a march. This week a protest camp is set up directly below my office window, and they haven’t stopped drumming since I got here half an hour ago. 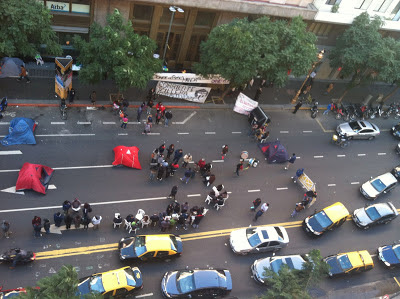 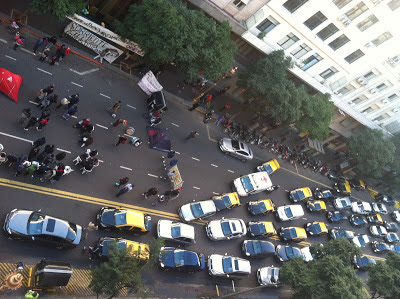 Doesn’t help that I missed the magic 9:15am subway and was crammed into the 9:20 one, smashed between an old man wearing an excessively puffy coat, and a younger man breathing obnoxiously loudly through his nose. I thought I was being all clever getting into the first car, because that one is usually less crowded. But I hadn’t realized the stale breeze from the open windows doesn’t reach area in the front of the first car, where I was pinned. So it was even more hot and stuffy than usual.

I thought my devoted readers might be interested to know more about my daily routine. I leave my house, locking both the door and the gate behind me, and walk nine blocks to the subway. It’s an uncomfortable 20-minute ride to my stop, where I squeeze out of the station and then walk a block and a half to my office. Through the revolving door, say hi to the man at the desk, and then take the old-fashioned elevator up to the 6th floor. It’s one of those elevators where you have to manually slide open the outer door and then the inner door, step in, close the inner door, close the outer door, and then push the button for your floor. When you get out, you repeat the process in reverse. It’s very quaint, and it intimidated the heck out of me when I faced it for the first time.

I ring the buzzer at my office door, walk in, kiss everyone hello (standard greeting: right cheek only), and then sit down at my computer to check email and get started on the day’s work.

I usually get lunch with a couple of coworkers at a tiny place around the corner that has wonderfully cheap pay-by-the-weight salads with a heavenly spread of vegetables. We eat at our desks in the office.

Often in the afternoon I go out to take pictures of something or other. The subway trip home is never as bad as the one to work, because I work very close to the last stop on the line. This means I usually can snag a seat, which guarantees a little breathing room and also makes it easier to do other things while riding, such as reading or studying flashcards.

If I go straight home from work, I’ll have just enough time to go running before the sun sets. Then I’ll often spend the evening Skyping friends, blogging, sending emails, and/or uploading photos to Facebook. And Snapchatting, of course.

Usually I only write about the exotic and exciting and fabulous bits of my life here, but now you know about the daily grind, too.