Fish and Fruit (and oysters!)

Bad news yall: last night, Katie’s fish Spotty went belly-up. I mentioned earlier that I felt guilty for shopping at Walmart. Ironic because I’ve driven there four times in the past three days. I had to go back today to return the fish, because apparently you have to take the dead fish back in order to get a new one. I thought that was absolutely disgusting, but somehow everyone at Walmart seemed to be totally cool with the idea. I figured it would be better to get it over with sooner rather than later, so this morning I scooped the fish out of the bowl and dumped him back into the bag he came home in. Drove him back to Walmart, just me and this dead goldfish in my car. Waited in the customer service line—gingerly holding the bag away from me—for ten minutes (apparently Walmart is busy at 9 o’clock on Saturday mornings?). The woman at the desk told me I had to bring her the new live fish as well as the dead one in order to make the exchange. So I went back to the fish tanks and found an employee to help me. She paged someone else to come, but no one came. So I found someone else to help me, and he paged someone else to come too… but no one came. By then I was going to be late to work if I waited around any longer, so I left. Just me and poor Spotty in the car again. I stopped by the apartment to drop him off, because no way was I leaving him outside in the heat (or in my car, ugh). Wrote a note to Krissi apologizing for the dead fish on the kitchen counter, and left for the market just on time.

After I got back from the market (which I’ll talk about in a minute) I took the fish back to Walmart again and finally got the exchange made. If, by the end of the summer, I’m as familiar with New Orleans as I am with that Walmart, I’ll feel quite accomplished.

On a brighter note, I LOVED being at the market this morning. It wasn’t a full day of work; I was supposed to just drop by to check it out, but I ended up staying til the very end. I got there at 10 and met my mentor, Emery, at the welcome tent. She showed me around and introduced me to the rest of the team. The market has one other intern this summer, a Yale student named Tatiana. I spent most of the morning standing with her at a station she had set up for kids’ activities—which we’ll take turns planning this summer. We gave out samples of a heavenly fruit salad she had made with some of the produce from the market: peaches, blueberries, and mint leaves. She had also set up samples of three different blueberry varieties and lessons and games about eating local.

Within my first few minutes of being there, someone overheard me tell Tatiana that I go to Carolina. He asked where I’m from because he’s from Winston Salem. Turns out he’s my godmother’s daughter’s lacrosse coach! How random. And his wife has actually been to Tarboro because she has a friend who’s from there. Such a small world!

When the market ended at noon, everyone pitched in to help break down and pack everything up, and the parking lot was clear by 12:30. I’m really looking forward to going back on Tuesday.

Krissi, Katie, and I spent most of the afternoon at the New Orleans Oyster Festival. SO fun. And the city has festivals like this all summer long! I want to go to all of them. From 1pm to 9pm, there was live music, loads of food (oysters prepared every way imaginable), oyster jewelry and oyster art, oyster cooking demonstrations, oyster information tents, and lots and lots of people. I tried pepper jelly oysters and charbroiled oysters; both were delicious. And I really loved the bands that played (especially The Benjy Davis Project). We’re going back to the festival tomorrow for more music and oysters! 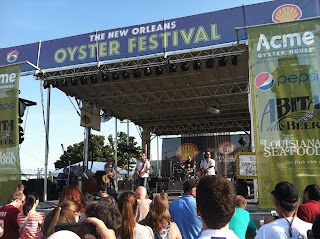 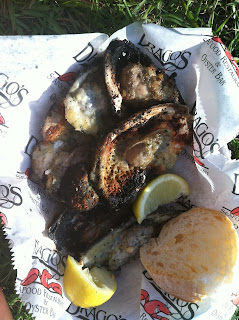