The last two weeks may be lost forever in the murky drudges of my memory. I just invented a new use for the word “drudges,” for anyone who wasn’t fooled by my confident application of said invention.

I’ll try to work backwards.
This weekend has been wonderful. Every weekend in NYC this summer has impressed me with its fun-ness. Today I am sitting in my favorite cafe for hours, working on some fun school stuff — not class stuff but other school things, like the mentoring program I’m organizing for new Robertson scholars. Speaking of class stuff, my online class ended this past Thursday and I earned an A, woohoo! It had pretty much dominated all my free time for the past two or three weeks, so I feel that grade is well-deserved.
I had work all day on Thursday but needed to take the exam between 7 a.m. and 9 p.m., so I did the multiple-choice portion in a cafe before work and wrote the essay during my lunch hour. After work I walked to a Mexican cantina near the Slow Food office and bought two $3 tacos, which were a delicious and satisfying reward for myself. I’m definitely making that a lunch spot on future Mondays and Thursdays.
Then I went straight to Prospect Park in Brooklyn for a free Nickel Creek concert that has been on my calendar since the beginning of the summer. Nickel Creek is probably my all-time favorite band. I’ve liked them since the boy I crushed on in tenth grade gave me a mix cd with some of their songs on it. That was 2008, and they didn’t put out a new album until this May — which gave me six years to memorize all of their songs. So now they’re on tour, and I saw them and it was magical.
The opener turned out to be a lovely surprise, a band from Alabama called The Secret Sisters whom I had seen in Chapel Hill two years ago at an Iron and Wine concert! I hadn’t recognized the band name but as soon as they came onstage I was super excited to see them again, because their music is fantastic.
And then after the concert, the food vendor was giving away bowls of free vegetarian food! I was in my own personal heaven. I could have burst from happiness. Or fainted. I hardly knew how to manage it. I just kept saying, probably to the annoyance of everyone else, “I am so happy. I am just so happy.”
Train delays meant it took us almost two hours to get home (most of which was spent standing in the hot stuffy subway station) and Ellie was miserable but I was still floating on my cloud of Nickel Creek ecstasy so I didn’t even mind. My online class was done, I saw my favorite band at a truly fantastic outdoor concert, and then I stuffed myself with curried swiss chard, tomato-breadcrumb salad, and sauteed summer squash. All of this in New York City, where I am living for free — three years after receiving that congratulations email, I am still incredulous of how incredible this scholarship is — while interning for two wonderful nonprofits for the summer.
To recap, things I love that all converged on me at one point in time:
Nickel Creek
being outdoors
pretty lights
friends
rediscovering great music
free things
vegetables
NYC
summer
finishing a class
tacos
beautiful weather
I am still basking in this, in case it wasn’t obvious.
My tweets from the night were unsuccessful attempts to use words when words were simply inadequate: 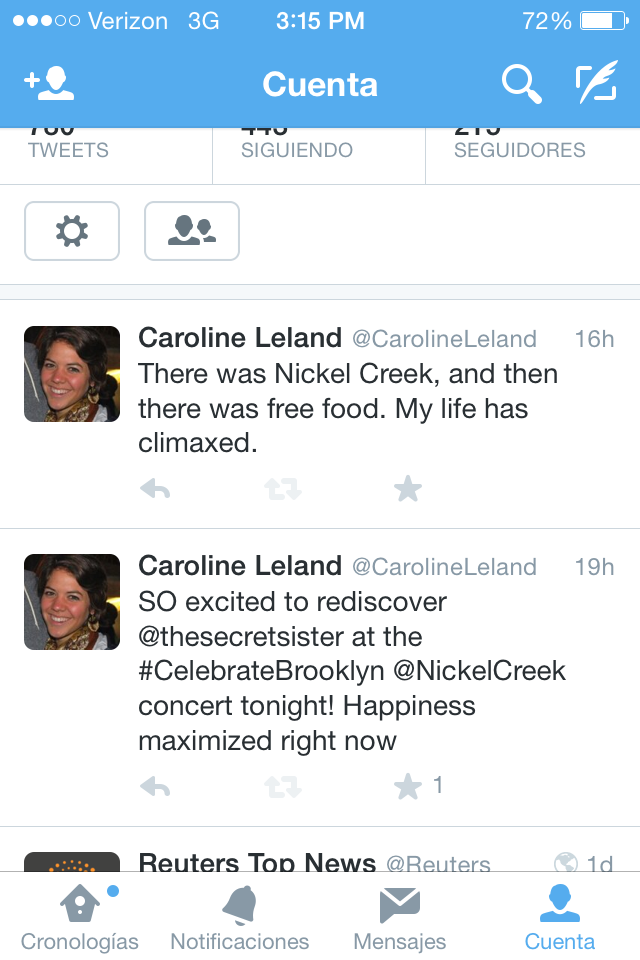