This morning I went to brunch with a friend of a friend, a woman named Virginia who is a
New Orleans native. She was so friendly and incredibly helpful in getting me oriented in terms of the city’s layout. She printed out maps for me and wrote up lists of places to go, and after we ate she drove me around and showed me how to get to those places. It was really fun meeting her and so valuable gaining that understanding of the city from her, especially since I’m generally bad with directions. And now I have several more pages of recommendations that I’m excited to try out, as well as a new friend in the city. I am so appreciative of how friendly all the people I’ve met have been. Even when we were in the restaurant and Virginia was drawing out a map for me, the girl at the table next to us overheard and spoke up to welcome me to New Orleans. Moments like that remind me how glad I am to be here!

Mid-afternoon, Krissi and I took the bus back to Woldenberg Park for the second day of the oyster festival. The same restaurants from yesterday were represented there, but they were selling different dishes (more ways to eat oysters!) and there were different bands playing. Today I tried a fried oyster po’boy and some sort of oyster stew over garlic cheese grits. And a Baked Alaska with chocolate sauce, which turned out to be about a dollar a bite but in the moment was totally worth it. (According to Wikipedia, February 1 is Baked Alaska Day in the US. Who knew? Mark your calendars, everyone!)

During a break between bands we walked around in the French Quarter, checking out the shops while eating the pralines we bought. We kept finding more to explore and ended up not returning to the festival, but we had been there for long enough anyway.

Another full and fun day! 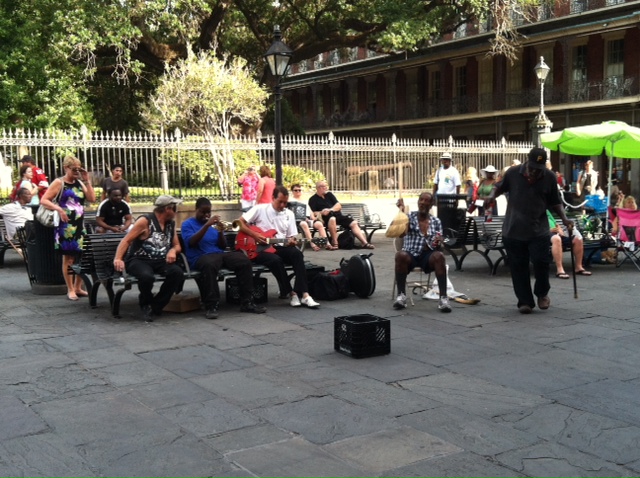 This is a bunch of guys jamming out in Jackson Square. The man in the chair to the side is spinning a broom around his head, and the man with the cane next to him is dancing. Krissi and I sat there for a while listening and watching because they were really entertaining.