Oxymoronic observations about blogging:
1. The more free time you have for blogging, the less material you have to blog about. It’s an inconvenient inverse relation, but not one I’ve faced this summer.
2. The more life you live, the less time you have for recording it. An opposite situation with a similar outcome.
3. The longer you wait to blog, the less you find yourself able to remember stories to blog about (yet another unfortunate thing).

Not really sure if those add up but it’s the #truth.

Another observation is that I get overwhelmed/stressed when it’s been more than a few days since my last blog post. I become tempted to over-summarize and/or I worry about forgetting important details or stories. But whatyagonnado. Too busy YOLOing to blog about it, that’s a problem I’ll take any day.

But in a cut to the chase:

Last week I didn’t have Slow Food work; they close the office for the week of July 4. So I got Monday off, but I had to go in to the City Harvest office on Thursday instead of Friday due to the holiday. SFUSA closing that week was actually convenient because otherwise I would have had to ask off work that Thursday due to the switched-up CH schedule, if you’re still following that. So Monday was chill but the rest of the week flew by, leaving me scrambling to pack for DC in a rush and leaving my blog thus sadly neglected.

Anyway, quick summary of the week:

Monday I met with Charles Buice, the president of the Tiger Foundation, which shares the same benefactor (Julian Robertson) as the Robertson Scholarship, which pays for my college. His foundation gives grants to a lot of cool nonprofits, so it was neat talking to him about his work and sharing some of my ideas about starting a community development program in my hometown of Tarboro.

Tuesday I led a grocery store tour with two single dads who were touchingly concerned about feeding their families healthily. Even though the tour group was so small, it was still really meaningful and rewarding to me because I knew these men had a lot of influence over their entire families.

That evening, I volunteered for several hours at the Summer Fancy Food Show, the largest marketplace of specialty foods and beverages in North America. It was a volunteer event offered through City Harvest, designed to rescue for donation all the leftover gourmet food that had been displayed at the show. I was a little disappointed that we weren’t allowed into the main hall until after vendors had already started breaking down their booths; also we weren’t allowed to eat anything. But it was still cool to see the tail end of the event and participate in the rescue efforts. I also caught the overtime portion of the Belgium-USA game just in time to see USA get eliminated from the World Cup.  🙁

Wednesday was another nutrition tour day, this one in Bed-Stuy. Sagar came over to my apartment later and we made a delicious sauteed eggplant dish for dinner. 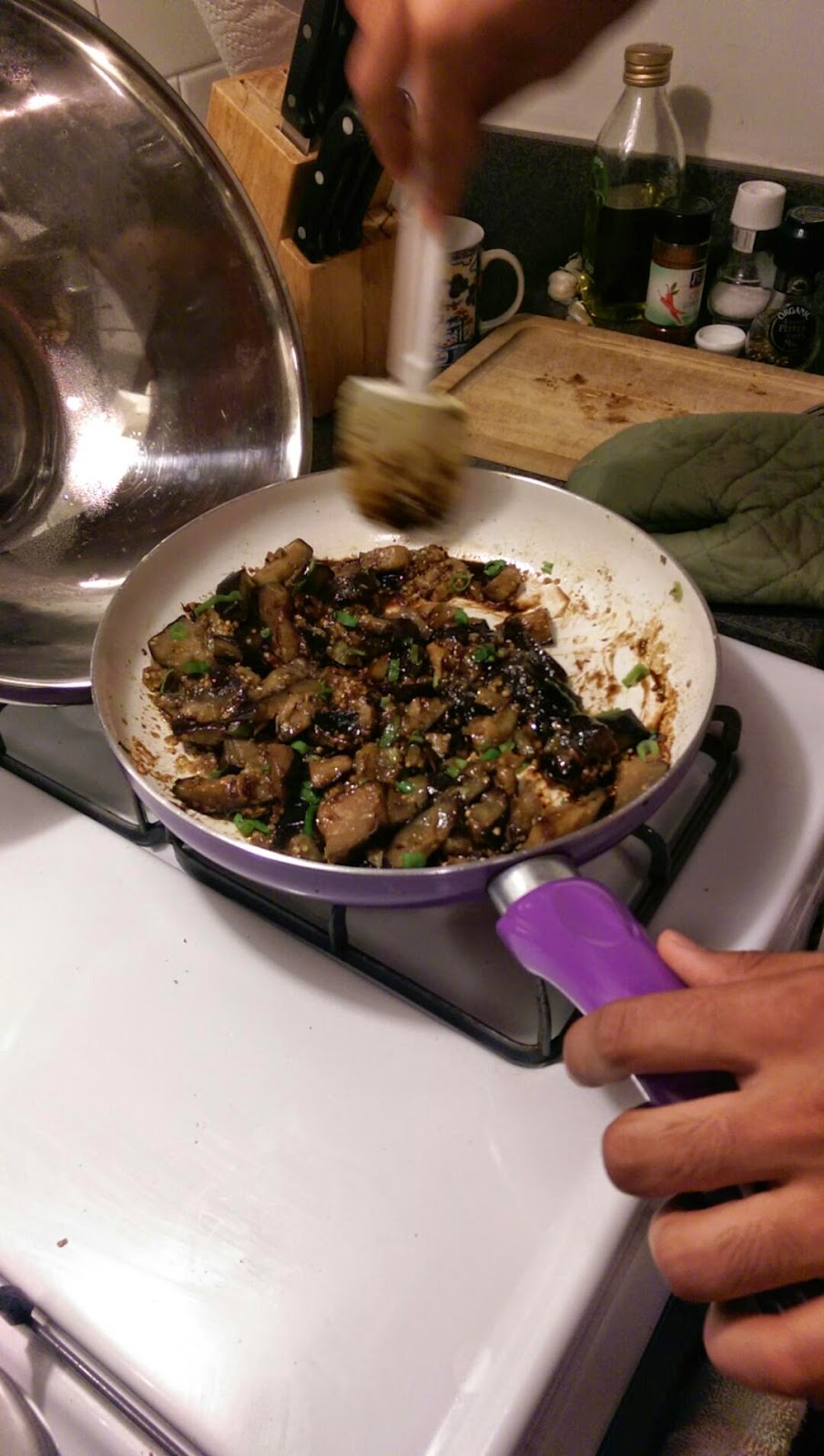 After the normal end-of-week meetings in the City Harvest office on Thursday, I caught a 2 p.m. bus from NY to DC! My roommate Ellie was supposed to take the same bus as me, but took the subway from work in the wrong direction and didn’t notice until it was almost at the end of the line. She called me from deep in Brooklyn right before our bus left Manhattan. I immediately started searching online for other buses available that afternoon, but she decided to just jump on a train instead, telling me that she might even arrive in DC before me — not so. About halfway there, her train hit a fallen tree and lost electricity. She waited at a standstill for a couple hours before getting shepherded onto an equally full train headed in the same direction, on which she stood in the aisle for two more hours until they finally arrived at 11 p.m. — four hours after my bus. But this is very typical for Ellie.

While I waited for Ellie to arrive, I got dinner at Union Station and did my online class assignment for the day. When I realized how late it would be before she got there, I got in touch with her friend with whom we were originally supposed to eat dinner and found my way to her apartment at George Washington University. On the public bus between Union Station and GW, I was befriended by a large crowd of fraternity “men” who were in DC for a frat conference. It was like being on a camp bus, with all the singing and joking around.

Ellie’s friend (whom I had never met before) was super friendly, and I enjoyed hanging out with her and her roommates until Ellie arrived. The three of us then went out and found our Duke friends at a nearby bar. After a short time, Ellie and I went home with the Duke guys and crashed on couches in their apartment.

For context: all the Duke people I hung out with that weekend were friends from Maxwell, the selective living group I joined during my semester at Duke last spring. A lot of Duke graduates move to DC, and current students and alumni alike all converge on DC for the Fourth every year. This was my first time joining the festivities, as I was in Argentina last summer.