Some tango music and a trippy performance

The last couple of days have been really great, those type of days when you walk purposefully and go to bed feeling accomplished.

Yesterday after work I met up with Léa to talk about our next trip. We’re flying to Salta on Friday morning and will return Tuesday afternoon. Tuesday is Argentina’s Day of Independence, but we’re both having to take off work on Friday for the trip.

Then I got on a bus to meet up with my friend Sarah for a tango concert. Got off the bus after five blocks or so, because I felt that walking would be faster with all that 7pm traffic. Big cities, eugh.

Arrived breathless and five minutes late, but all’s well that ends well. The concert was great, a free event inside some sort of museum or cultural center. It was a small room filled with old people who knew all the words to all the songs and sometimes sang along. I loved it. 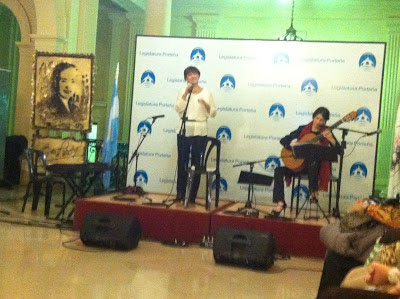 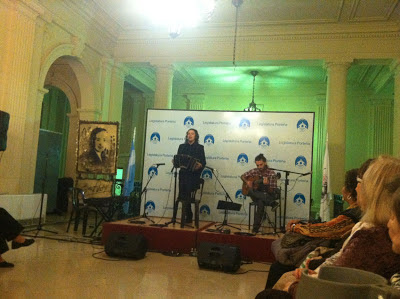 Then there was a milonga, which is what you call it when people pair off to dance tango. The performers did a couple songs, then several couples from the crowd joined in. Seeing those grandparents spinning around the dance floor with each other made me happy. 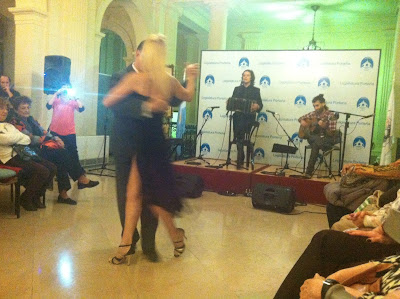 I forgot to blog about the time I went to a real milonga, and got taught how to tango by an old Argentine man. It was a Connect123 event where a bunch of girls met up for drinks. Léa and I were the only ones who danced with the spiffed up viejos (old men) there. 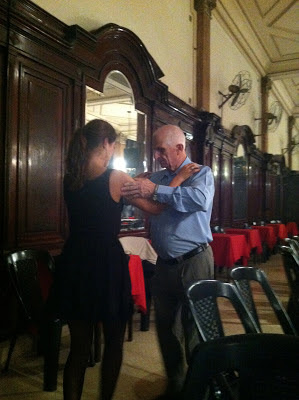 Tonight I went to an international show called Fuerza Bruta– one of the most incredible performances I’ve ever seen. It was incredibly trippy, with crazy music and colored lights and strobe lights and fog and people doing weird things in the air over your head. And there was a pool hanging over the crowd with these girls thrashing around on their stomachs at the bottom. And a guy on a giant treadmill ran through a bunch of fake walls that exploded into glitter. And it was all right in the middle of the crowd, except when it floated over your head. I swear I’m not on drugs, this actually happened. It was a fantastic display of creativity and strength and physics, with a flair for dramatic presentation. Soooo good, and I paid less than USD$20 for it.

I took a bunch of pictures with my super cool disposable camera, but will also be able to repost photos from other people once they are shared on Facebook.