Ranked in descending order of how much each idea scared me while on the AT:

1. starvation as a result of being unable to call for help due to full-body paralysis caused by a broken back/neck via falling tree or tree limb during the night
2. randomly murdered by another person, probably with a knife or machete
3. skull crushed by falling tree
4. mauled by a bear
5. bitten by a poisonous snake (this is the option that I came closest to actually experiencing, as evidenced by photo below)
6. struck by freak lightning storm
7. anaphylactic shock induced by swarm of stinging yellowjackets/bees/wasps
8. swept away/drowned in flash flood
9. slip/fall/hit head on rock OR bleeding out from broken leg
10. falling off a cliff or into a ravine

But none of that happened, hooray!!! 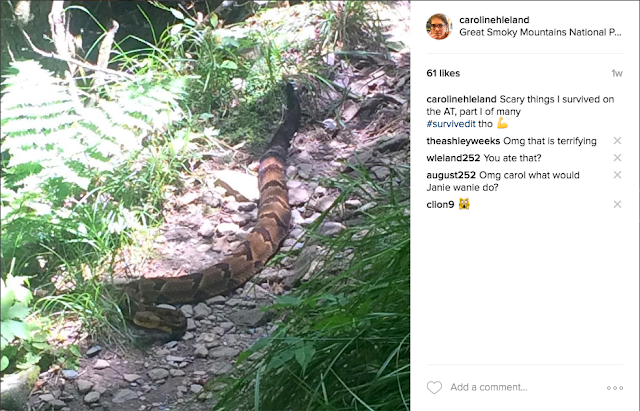