As I type this, I’m sitting at my desk, eating fresh pear and blue cheese, and sipping Malbec. For me, the past couple of summers have seemed like practice for my life after college— except maybe a little more extravagant and exotic. But still. It makes me dread graduation much less.

On a similar fruit-and-cheese note, today I ate an apple with fresh mozzarella for breakfast, and it was incredible. Did such a combination exist before I thought of it this morning; and if so, why did no one tell me about it?? New favorite snack.

Another huge discovery I made recently: If I take the subte (subway) 15 minutes earlier in the morning, there’s space to breathe. This is actually life-changing for me. I’m the kind of person who loves to arrive on time— exactly on time. So getting up 15 minutes earlier to get to work 15 minutes early is not something I would normally do. However, this is what the subway is like at 9:30am: 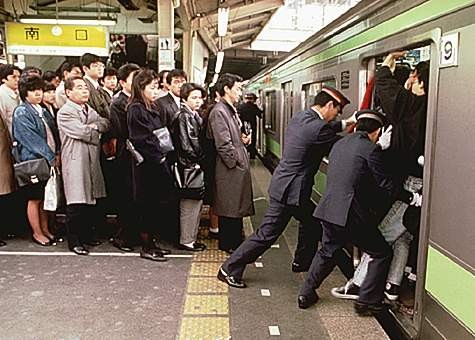 But without the orderly line and the uniformed people helping. And, of course, everyone’s Latino instead of Asian.

You’re smashed by other human bodies on every side, yet people keep cramming in. It’s literally difficult to breathe. But my friend Sarah, who takes the same subte to work, told me this secret of 9:15. And now I’m early to work every day, but I arrive much more composed.

However, it’s not always that easy to avoid subte problems. When I was trying to get around the city this morning, the subte line I needed was broken and just never came. I ended up having to walk 10 or 12 cuadras (blocks) to a different line. Instead of being in the office, I spent most of my day in transit. I was meant to take photographs of two different historic cafes, which I did. But the taking-pictures part took probably 25 minutes combined, yet I left my house at 10am and got to work at 1pm. Let me emphasize that’s 2.5 hours of transit. At least I got some cool pictures. (They won’t upload right now, but hopefully I can get that figured out soon.)