Adventures in the Kitchen, Part II

Yesterday I tried cooking again. You’d think it would be an intuitive thing, but either I was born with a defective culinary intuition or it has to be learned. Because I’ve been struggling much more than I think I should. I tried to fry okra and it took me two hours because earlier when I tried boiling beans I learned that I can’t multitask in the kitchen because I get distracted and forget that there’s water boiling or cookies in the oven or whatever it may be. (The cookies did turn out okay though— gotta love slice & bake.) I also managed to set off the fire alarm twice and now the entire apartment smells like grease. I think it saturated my clothes and skin too, because I felt greasy until I showered.

So that’s on my to-do list of life goals, learn to cook. But I’ve learned to stay away from the category of fried foods. 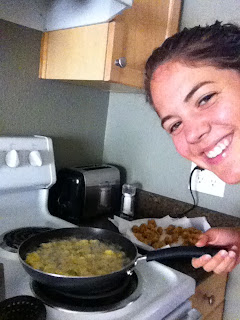 In spite of my cooking struggles, I had a very pleasant afternoon. On the way home from work, I found a really cute used bookstore. I spent a few minutes poking around in there and walked out with three new books. I realized the other day that I haven’t read any books since I’ve been here, something I’m not okay with since reading is always a priority for me during the summertime. So last night after cajoling some of the Robbies into eating my fried okra, I curled up on the couch with my newly acquired copy of The Da Vinci Code, which I’ll be absorbed in for the next few days.