At Tuesday’s market, we had groups of kids from summer camp coming through again. There were a lot more children than last week, partly because only half of them made it to the market last week. The second group was on its way to the market when a child had a seizure on the bus. He was okay in the end but the teacher cancelled the trip in order to rush him to the hospital. So those kids are coming next week instead.

Tati and I were in charge of running the kids’ program, so the day flew by with back-to-back groups of kids coming through. If anyone is interested, ask me about tomatoes next time I see you and I can give you my ten-minute spiel about why they’re awesome. 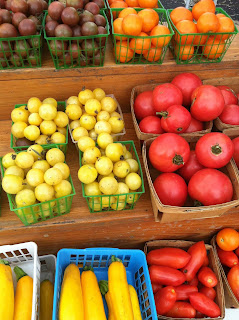 I spent the afternoon baking a birthday cake for my friend Joyce, another Robertson here in New Orleans this summer. It was an unnecessarily challenging undertaking. I made the cake part from a box, which was easy enough. But I forgot I had bought chocolate chips to add to the cake mix. By the time I remembered, the cake had been in the oven for several minutes. After accidentally dumping the chocolate chips into a heap in the pan, I tried to stir them in to distribute them evenly, but they were melting and the cake was half-baked already so it was pretty much a gooey mess. But I thought whatever, it’ll be a chocolate swirl yellow cake, and stuck it back in the oven. 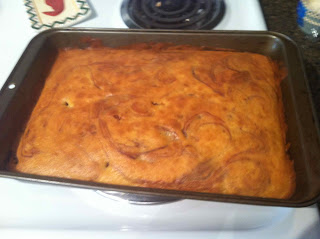 Then I set about making icing from scratch. Originally I was going to follow a recipe I found online. But it called for 9 cups of powdered sugar, and the powdered sugar came in a 7-cup bag, and what was I going to do with so much leftover powdered sugar? So I figured I’d just reduce the ingredients to seven-ninths of everything. But I’m really bad at simple computation so I ended up just eyeballing everything. (What’s 78% of a three sticks of butter? Don’t ask me…)

It was going okay, but turns out the recipe I originally was using made 34 servings (who needs 34 servings of icing??) so even though I happened to reduce it some, I still found myself with a massive pot full of chocolate icing. It was really dark too (as opposed to being milk chocolate), but I didn’t know how to fix that because I didn’t have any extra ingredients except milk which I knew would only make it runny. I like dark chocolate, so I just hoped Joyce did too.

During this domestic adventure I also spilled the entire bottle of vanilla extract on the counter, sprayed myself with the sink, and ended up with chocolate all over my arms and t-shirt. I should definitely run my own cooking show.

While I was waiting for the cake to bake, I decided to try cooking the kale I got from the farm the day before. I sauteed it with a bunch of other vegetables and some olive oil, and it turned out okay. Kind of bland but not bad. I realized as I was dropping the last few pieces of kale in the pan that I had forgotten to wash it. (My clue- dirt clods rolling off the leaves.) I was about to be grossed out before I remembered that I have eaten much less sanitary food (backpacking with strict rations can make one somewhat desperate). If I was going to get sick it wasn’t going to be from farm dirt. So I ate it anyway, with the serving spoon out of the pan. Cooking for myself is fun if only because I’m the only one who has to suffer the consequences of poor hygiene.