Léa’s mom picked us up from the train station near Crans, the mountain village where her family has a chalet. We drove for 10 or 15 minutes up a steep and winding road in the dark. The two Oriol women in the front — who hadn’t seen each other since Christmas — chattered excitedly in French, occasionally turning to me to offer a quick synopsis in English.

When we arrived, we were greeted warmly by Léa’s dad, her aunt, and some family friends from Paris who were staying the night. Soon after I met her, Léa’s aunt realized with a start that I was THE Caroline from Léa’s blog last summer. I was featured just as prominently in her blog as she was in mine, so her family made me feel like a celebrity, extremely excited to meet me after reading about me for so long. It was wonderful for me to meet the family of someone I love so much, too — and it was no surprise that her family was just as lovely as her.

After some Champagne and conversation by the fire, we all sat down to a delicious Swiss dinner called raclette. We used this contraption: 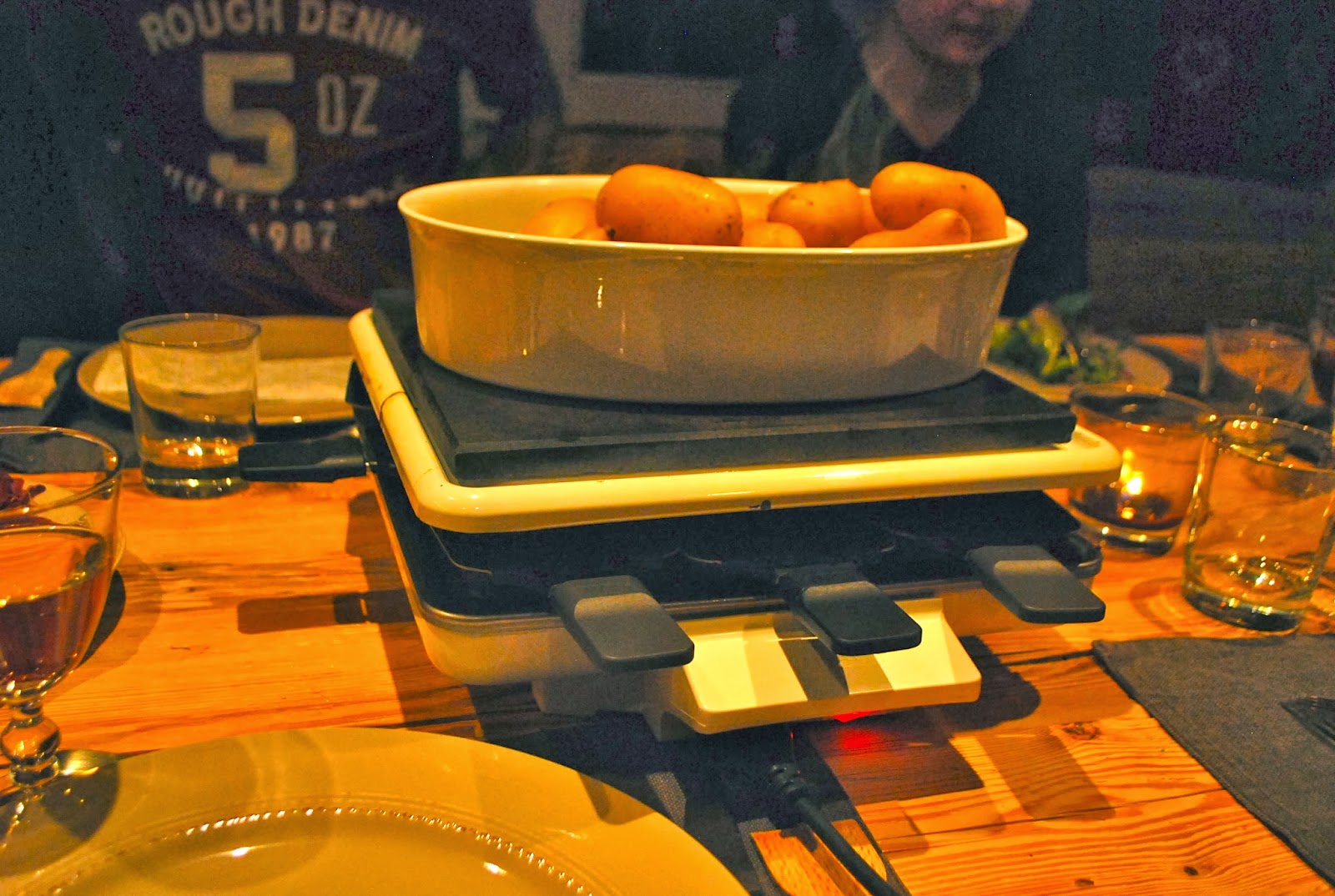 to melt individual slices of cheese, which was then poured over potatoes, onions, pickles, and jamón crudo (if you’re into that kind of thing). (Speaking of which, I was so excited to hear that Léa is now vegetarian!!! We always used to joke last summer that the only difference between us was that she ate meat and I didn’t. But now, after watching several documentaries on the industrial meat-production system, she’s been converted. Knowing how much that girl loves meat, this is a big deal. Added bonus that it made me not have to worry about being rude for declining meat throughout the weekend.)

The raclette dinner was followed by ice cream and then tea and Swiss chocolate by the fire. At the end of the night, I was bursting with contentment and food.

The next morning, we slept in and then had another feast for breakfast. Léa’s mom makes these incredible green smoothies from fruit and spinach that make me feel energetic and powerful just by looking at them, let alone drinking them. We also had artisan bread with an amazing sweet chestnut spread, plus I discovered the adorable French soft-boiled egg: 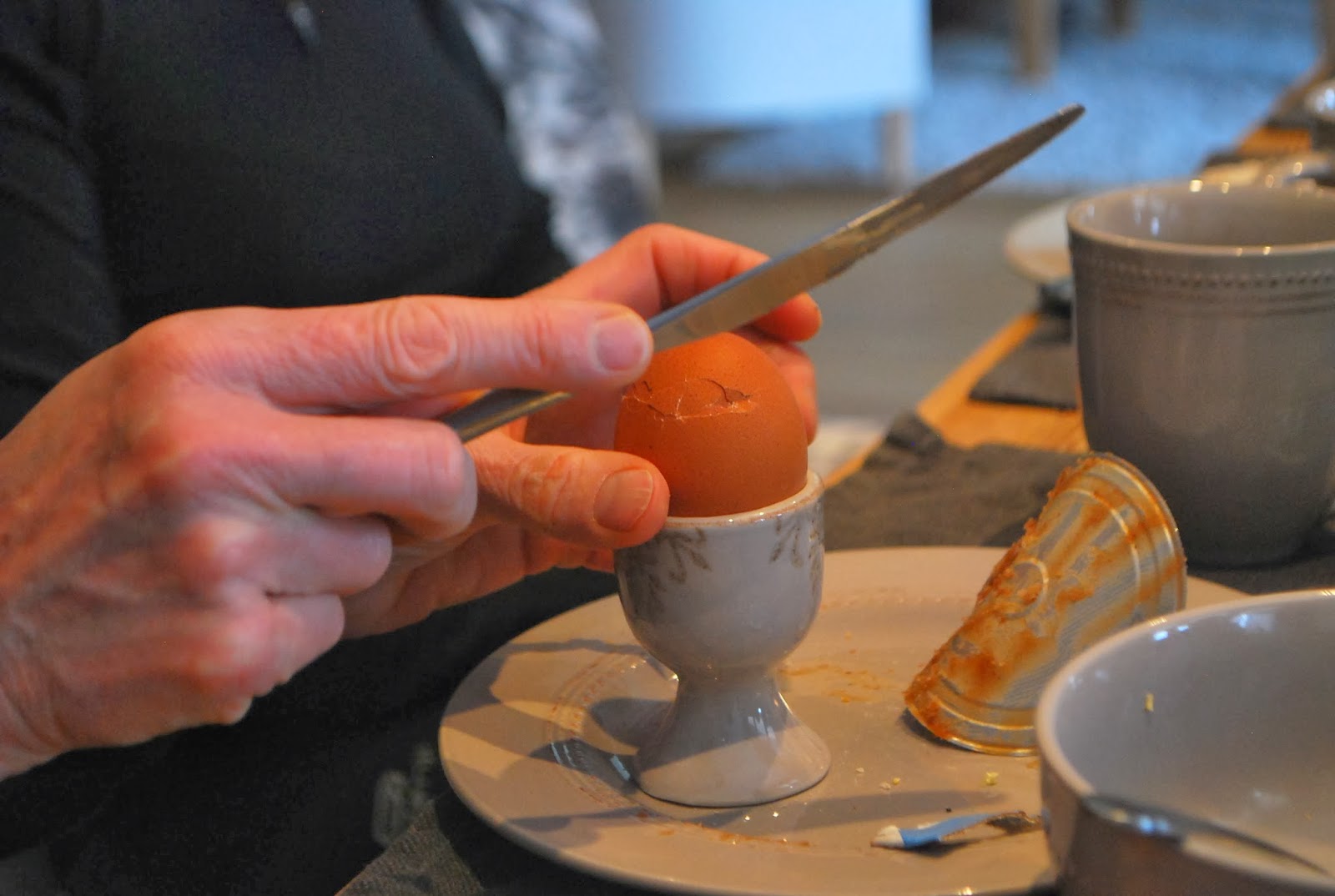 We spent the day snowshoeing around the ski resort. We were hoping to watch the women’s downhill skiing World Cup, but it was delayed due to heavy clouds (which, at that altitude, were experienced as fog). Instead, we just snowshoed more — good thing I trained in the Pyrenees! (what is my life)

Later we went out for drinks at a hip bar downtown with live piano music, strings of white lights hanging down the windows, and couches and chairs arranged in close circles around each low table. Dinner that night was equally as incredible: this time another Swiss classic: fondue. Léa’s dad also made us a spectacular dessert of pear, chocolate and whipped cream. 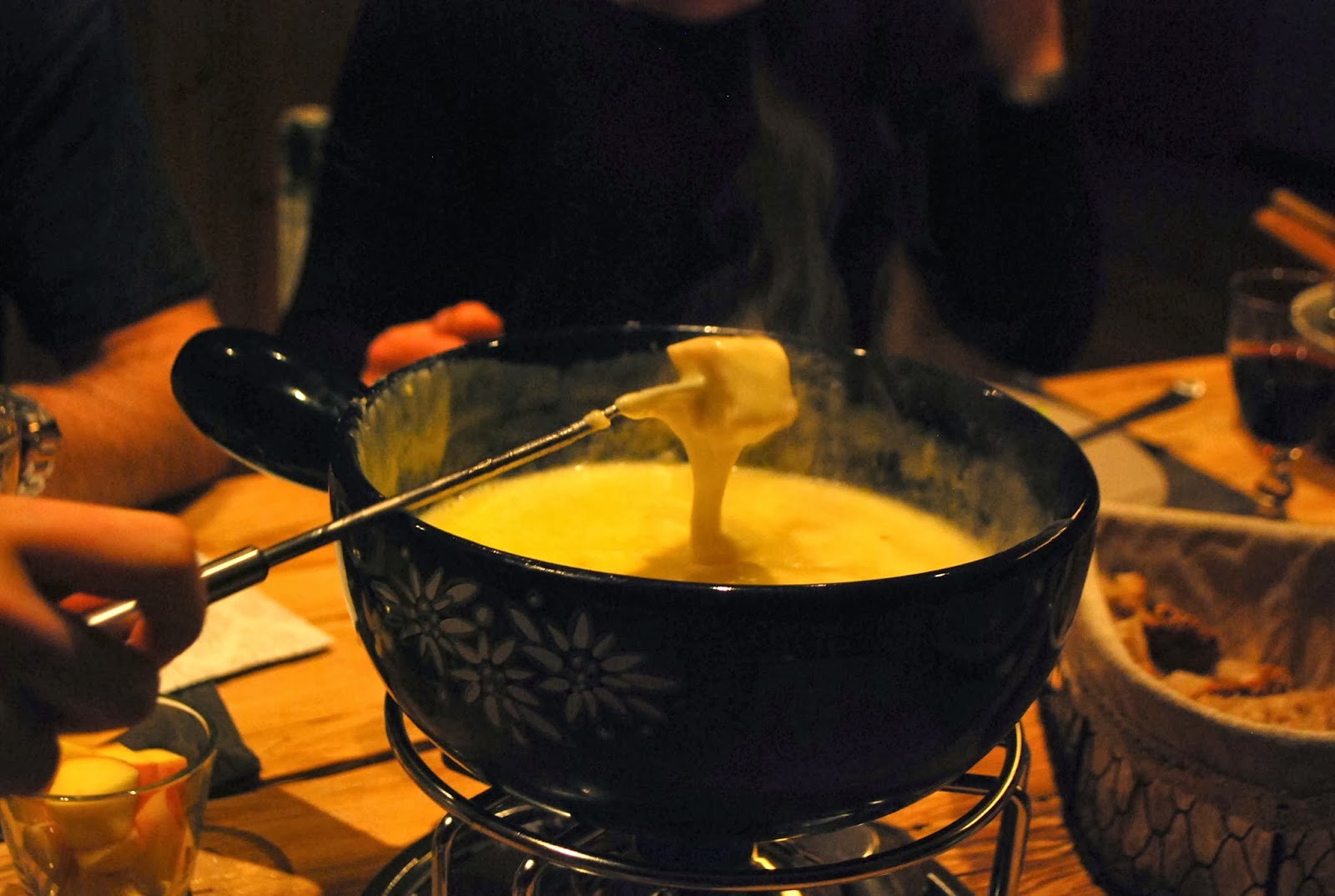 Again, it was followed by tea and chocolate by the fire. It was like a dream. Throughout the weekend, the family made concerted efforts to keep the conversation in English for my sake, even though none of them were perfectly comfortable with the language. But their priority was making me feel comfortable; they welcomed me so fully that I felt like they had adopted me.

The next day I casually went skiing in the Alps. Léa has two sisters who ski competitively, so with all their spare equipment I had only to rent boots — and the Oriols wouldn’t even let me pay for that! All the altitudes were posted in meters, of course, but I looked up the conversion when I got back and found that we had been skiing at 7,000 to 9,000 feet. Somehow it wasn’t even cold, though — the temperature stayed above freezing. And there was absolutely no wind, which I appreciated immensely.

Partway through the day we paused to watch part of the women’s skiing World Cup that had been cancelled the day before. I know nothing of the technics of the sport, but I can tell you all the competitors were going very fast. 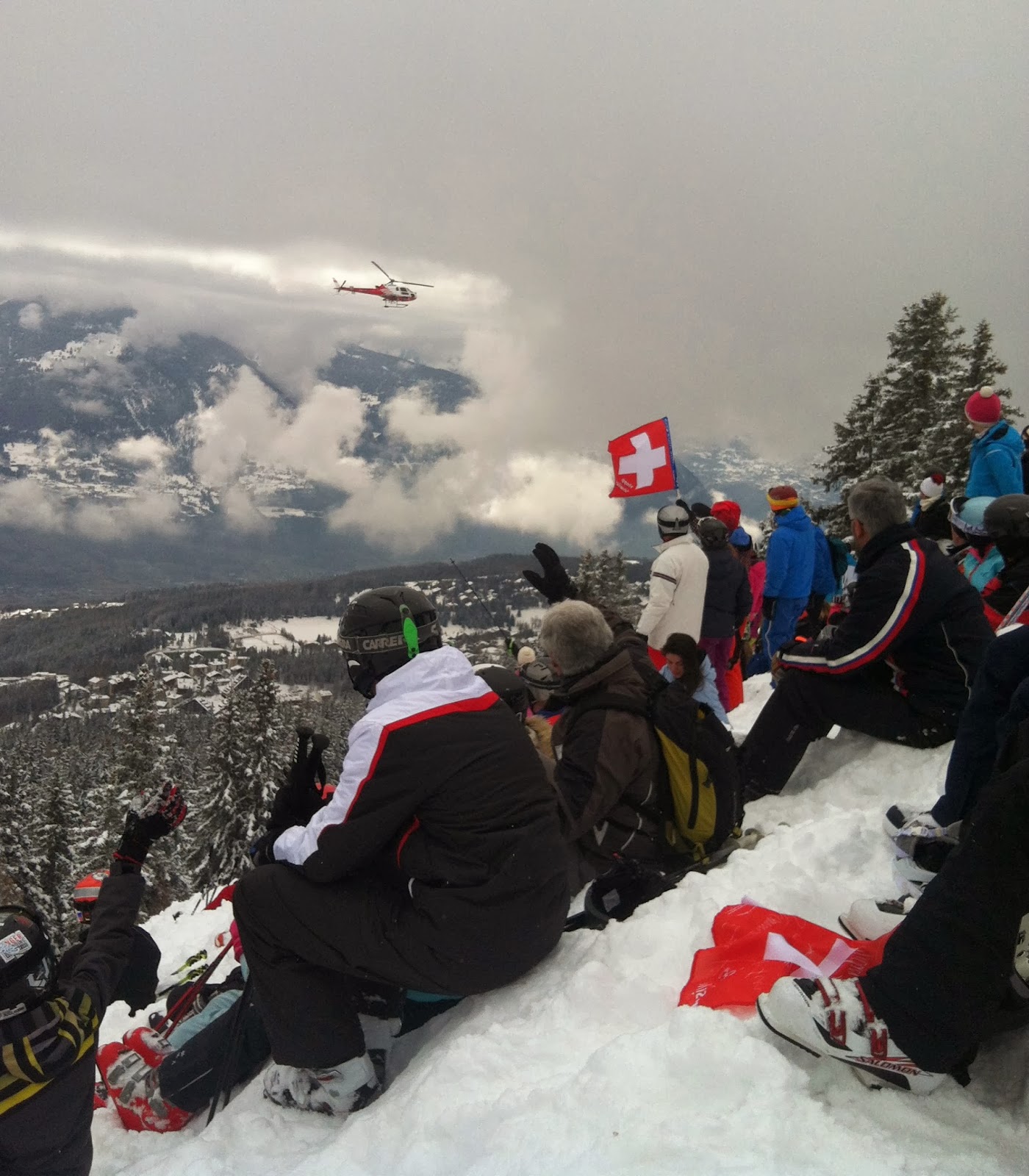 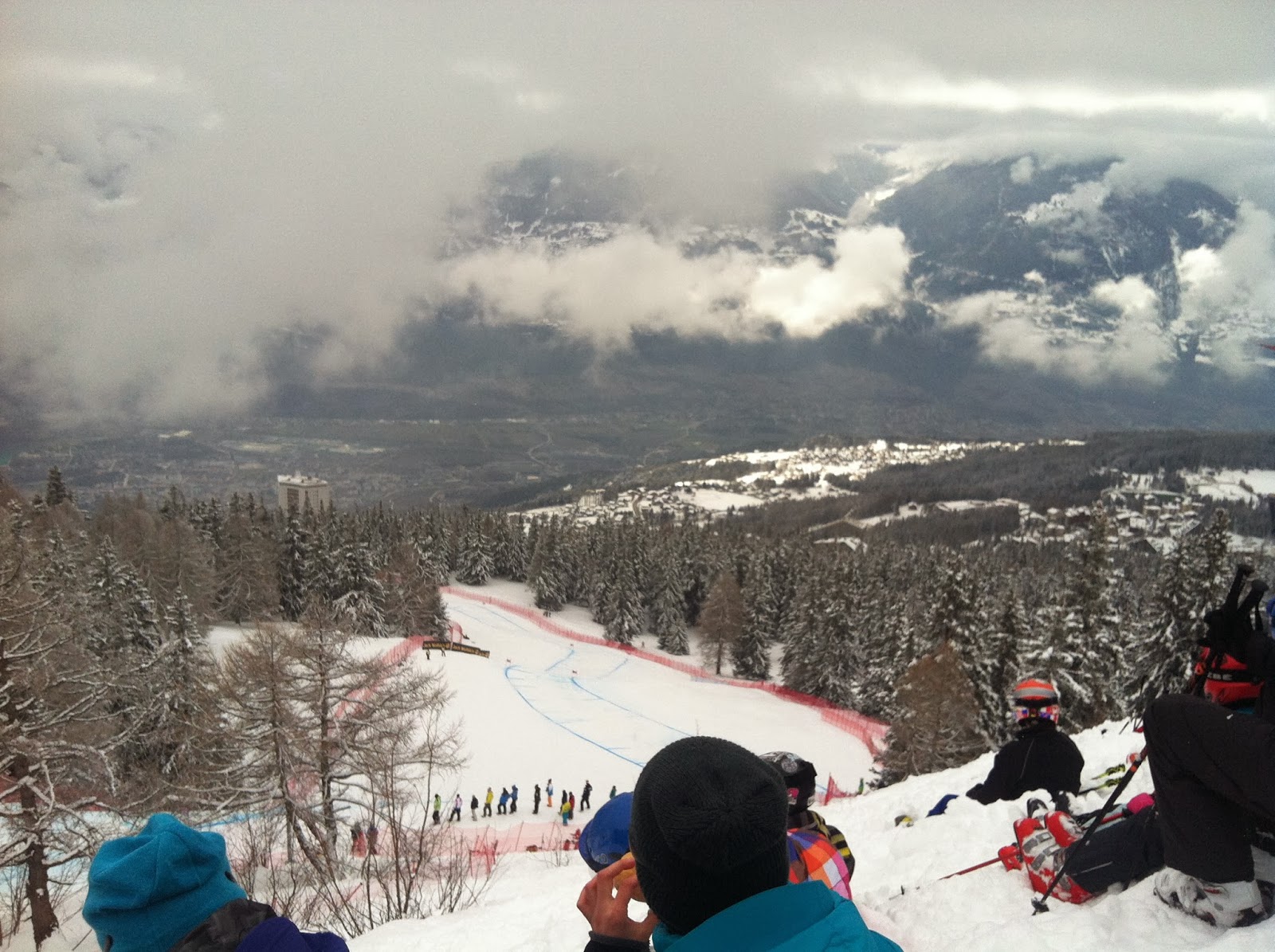 Just before we stopped for lunch, thick clouds rolled in again and made it pretty much impossible to see. At one point I was skiing on a narrow run with a cliff on my left (slightly terrifying) and occasional giant rocks looming out of the fog on my right. I pizzae-ed carefully to safety.

We left the mountains around 6, driving the two hours back to Léa’s home for dinner with her sister (who had stayed home that weekend for work).

The whole thing was like something out of a fairy tale, or a movie about someone else’s exotic life. It was so perfect I sometimes felt like I was dreaming.